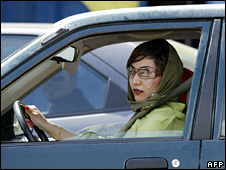 As soon as I saw the headline, I have to admit I was thinking “huh?” and “what!” I’m not too keen on products geared towards women because usually these products rely heavily on stereotypes. Unfortunately, this new feminine car does just that.

It’s suppose to come out in a range of “feminine colors” and “interior designs” because we are just so keen on how our car looks. I guess those guys in my neighborhood who spend thousands of dollars on rims and getting their car waxed didn’t get the memo that they’re not suppose to care how their cars look. Oh, and those women I see in big, black Escalades with spinning rims really didn’t get the memo that they’re suppose to be in more “feminine” cars, but I digress.

To make things even better, the new cars will feature “automatic transmission, parking and navigation aids and a jack for changing tyres without getting grease on your chador.” Again, I wonder why this is special to women. I’m sure plenty of men in Iran would love to drive an automatic, since they’re much easier to drive. My husband and most American men aren’t buying automatics simply for their wives to drive, but to drive themselves since they’re less of a hassle than stick shifts. Same for the navigation aids. As for not getting grease on a chador, who wants to get grease on their clothes? I honestly don’t understand why these products aren’t marketed to both genders, since they would seem to benefit both men and women.

While that was annoying, the part of the article that “grinds my gears” was the BBC’s little tirade about gender in Iranian society. After describing the features of the car the author writes, “If that suggests a degree of sexist stereotyping in Iranian society, it is, just possibly, true.” Yes, definitely. But then we start to get in this little slippery slope of self righteousness with the author saying things like “Iranian men have yet to absorb fully the message of equality” or “‘As a result, the report concludes, Iran’s new generation of working women “are obliged to play the role of a superwoman to resolve their contradictions in handling all tasks.’ It says such women ‘have become increasingly frustrated with their life'”.

Now I don’t disagree with these assertions, but I did wonder why they were brought up in an article about a car for women and why the author was acting like these issues were exclusive to Iranian women. American women have to contend with this issue as well. American women spend more time doing household chores than their husbands. British working women also have to contend with juggling it all while getting little help from men. So this is an issue that affects women all around the globe.

Next time, I think the BBC should just stick to the story.

This was also posted at Muslimnista.

Strictly Soulmates: The Trials and Tribulations of British Muslim ‘Singletons’
March 11, 2013
Score One for the BBC!
April 29, 2009
The Hole Story: Sexual Abuse in a “Strict Muslim” Household
April 2, 2009