Score One for the BBC!

A couple of weeks of ago, the BBC featured a story on Kurdish women football teams. Two weeks later, the story is still on the front page of the Middle East section of the BBC News’s website. I kept flirting with the whether or not to cover the story, but since it covers two issues that get little coverage in the same story–Muslimahs and sports–I decided it was worth looking at. The story itself had positive and negative points. By the time I finished reading it, I felt that someone at the BBC must be reading our site because this is the latest in a string of stories about Muslim women that don’t rely on stereotypes of Muslim women and automatically connect Islam with misogyny. 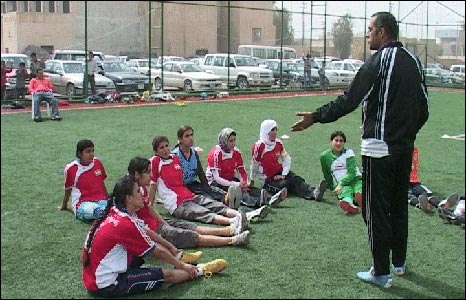 Image via the BBC.

That was the main positive point with the story. In the entire article, “Islam” and “Muslim” were not mentioned once. There was also no mention of hijab or the veil, which was refreshing since almost every story on Muslim women somehow manages to have that mentioned. The author mostly sticks to quotes made by players on the team. Thus, we get mostly the opinions of the football players without much interjection from the author himself, which is rare in stories about Muslim women. So we hear from the football players how they think their participation in the sport is affecting their society’s view of women in sports without having the author impose his view on theirs:

“Football is a first step towards freedom and liberation for Kurdish women,” says Sanaa Karim, one of the players of Fatat Erbil [Kurdish Football Team].

She believes that it is that sense of empowerment which is the main motivation for women who struggle to overcome prejudice as well as the lack of training equipment and limited competition.

When the statement comes from Sanaa, it comes across much differently than if the author were to make that statement himself. The statement seems sincere and also free of any cultural baggage because it’s coming from a player, who is reflecting on her experience alone.

The one thing that I did find to be suspicious was this quote:

Why was it mentioned that the coach is a man? Men coach women’s team in various parts of the world all the time. So why did the author feel that it was necessary to specifically point out the coach’s gender in this particular instance?

But even with that foul point, the BBC definitely scores a huge goal for unbiased journalism.