…but somehow the news article that covers it decides to completely change the subject to whether or not Islam condones/accepts polygamy. Yeah…I don’t quite understand the flow either. 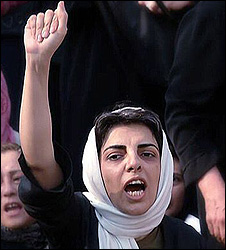 I was super excited to see the headline (“Iranian women battle the system”). It was like a “Yeah! Finally, Muslim women are being portrayed as really strong revolutionaries who are fighting against injustice WITHOUT the help of ‘Western’ feminists! Woo.” sort of moment for me. Plus that sweet picture of Parvin Ardalan (right) protesting is really inspiring.

So then why take the attention away from the work that these women are doing? Well…because it is more important to figure out what the Qur’an says about polygamy (one of the main issues for Iranian feminists, according to the article) than to look at what the women are doing about it.

I think that is an issue that we at MMW find to be really unsettling sometimes as well. I mean, why can’t we get past what the Qur’an allows or doesn’t allow? When it comes to things like polygamy, sexuality, hijab, etc., it seems that everyone is going to believe what they WANT to believe. Can we instead get to the practical issues…like the fact that polygamy is negatively affecting the lives of Iranian women, whether or not it is haram (sinful according to Islamic doctrine), and that these women are doing something proactive, revolutionary, and really freaking brave to fight against it and to simply make their lives BETTER?

Women’s issues seem to be especially susceptible to this type of analysis, especially from major news sources. The world is being fed this garbage about how Muslim women are oppressed and they are trying to figure out how much of it is validated by the religion. And the fact of the matter is that in these cases, when we are talking about the work of Iranian feminists, it is irrelevant how much Islam condones or discourages certain behaviors. As long as anything that happens to a woman in Iran (or Pakistan, or Saudi Arabia, or any country that is Muslim or inhabited by mostly Muslims) is regarded as a result of the Muslim-ness of the state, the continuation of Muslim women’s belittlement by the Western world will occur. Their fights against unjust laws and sexist actions are not necessarily fights against ISLAM, and conflating the two will only result in more fear of being seen as a sinner when fighting against the system.