Since images often speak louder than words, from this week on I will include every week a news picture, which features Muslim women, with a special focus on women that usually do not receive a lot of “face time”. An image from Iran, where a major earthquake struck last Saturday, starts us off. May Allah ease the suffering of those left behind and give them the strength to rebuild their lifes.

In its new constitution, Somalia has banned female genital mutilation (FGM), but activists are concerned about translating this law into action.

A former employee of a Disneyland hotel in California is taking Disney to court, after being unfairly removed from her job when she refused to remove her headscarf in 2010.

Human rights activists are concerned about the custom of selling (at times married) women by their male family members in eastern Afghanistan. 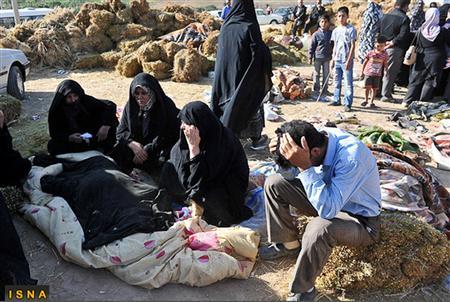 Last Saturday’s earthquake in Iran has killed hundreds of people, a majority of whom are women and children. Image by REUTERS/Arash Khamooshi/ISNA.

A pro al-Qaeda group has ordered Kashmiri women to cover themselves, and stop using their cell phones in public, otherwise they risk an acid attack.

In his last act of power, Libya’s transitional leader Mustafa Abdul Jalil fired a female presenter during the handover ceremony for not wearing a headscarf.

In an attempt to fight poverty and malnutrition in rural Mauritania, a project has been set up to introduce poultry farming to local women.

The Tunisian Islamist political party, al-Nahda, has proposed a conditional clause which will say that women “complement” the role of men in the family, instead of that they are equal to each other. Thousands of women have rallied against this degradation of their status in Tunisia.

The gender parity law has resulted in a record number of women in the parliament of Senegal, but critics claim that a majority of these women were not chosen on merit.

It made headlines everywhere: a city in Saudi Arabia, only for women! Even though there are plans to build a new city in the Kingdom, it will not be for women only, according to Saudi Arabia based Al-Arabiya.

Now 18 years old Soumaya Noureddine has kept a diary during the 2006 war in southern Lebanon, in which she has collected newspaper articles pictures and personal stories about her life in wartime.

Hundreds of Bengali and Bangladeshi women are being trafficked to the coastal district of Kutch, in Gujarat, India, to be married off as brides or pushed in to prostitution.

In southern Tajikistan, prostitution is on the rise, especially among widows and divorced (young) women, who generally do not have any other options to generate income. Question now is whether prostitution should be legalised, or should it be made a crime?

In North America, Muslim communities are changing their approach to marriage and divorce, according to a piece by Sheema Khan in The Globe and Mail.

IDN-InDepth News features an interview with Libyan activist Nadine Nasrat on the fight for women’s rights in the country.

Thousands of Bangladeshi female workers in Jordan are claiming that at least 23 of them have disappeared during the last year, blaming both their own government officials in Jordan and the owners of the company they are working for, for ill-treatment and not answering their questions.

A suspended prison sentence has been given to a drunk Polish migrant worker, who verbally and physically abused two British Muslim women on a train in the UK. The Polish woman told the women to “go back to their country”.

When in 2010, Shabana, a dancer, was killed in Pakistan’s Khyber Pakhtunkhwa province by the Taliban, many feared this was the end of cultural life in the area. Even though many are not located in the province itself, people like 22-year-old fashion designer Parkha Khan, hope to restore the cultural identity of the province.