Reactions to Hasna Kandatu’s Protest: Shaking the World or Sensationalism?

This post was written by guest contributor Christly Palacio.

Some Philippine news outlets, such as rappler.com, recently reported on the sole Filipina featured in Newsweek’s list of “150 Women Who Shake the World”.  A short biography is offered on the project website: 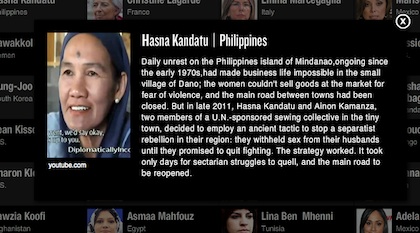 Hasna Kandatu's profile from the list of 150 Women Who Shake the World.

“Daily unrest on the Philippines island of Mindanao, ongoing since the early 1970s, had made business life impossible in the small village of Dano; the women couldn’t sell goods at the market for fear of violence, and the main road between towns had been closed. By in late 2011, Hasna Kandatu and Ainon Kamanza, two members of a U.N.-sponsored sewing collective in the tiny town, decided to employ an ancient tactic to stop a separatist rebellion in their region: they withheld sex from their husbands until they promised to quit fighting. The strategy worked. It took only days for sectarian struggles to quell, and the main road to be reopened.”

On the surface, it seems like a good story. Although Kandatu’s Muslim religion is not explicitly identified in the biography, she is depicted as having rights over her own body, a stark contrast to the stereotype of Muslim women who are merely subservient to their husbands’ sexual demands.

Beyond this positive note, however, I find Hasna Kandatu’s biography guilty of sensationalizing and exaggerating her contribution, especially with bringing cessation to the separatist/secessionist rebellion. Some sources, such as ABS-CBN news, merely mention that her act helped subdue fighting between villages, not the separatist rebellion. Furthermore, it is rather simplistic that withholding sex can bring an end to the decade-old secessionist/separatist movement.  It disregards historical, political and other factors that ignited the movement and continues to fuel it.

So when the write-up tells us that “They decided to employ an ancient tactic to stop a separatist rebellion in their region […] It took only days for sectarian struggles to quell, and the main road to be reopened,” the mention of quelling sectarian conflict is baffling.  I am not certain if Newsweek is referring to the conflict between villages or the war between the government forces and the rebels.  Although occasional conflicts between Christians and Muslims have arisen since the beginning of rebellion, sectarian differences are not the main factor in the ongoing conflict, which can be traced further back to Spain’s unsuccessful attempt to subjugate predominantly Muslims areas in Mindanao.

The supposed empowerment of Muslim women like Kandatu unfortunately resulted in the reinforcement of another stereotype, that of the sex-hungry Muslim man.  For example, in a rather inane attempt to understand Umar Farouk Abdulmutallab, the underwear bomber, and consequently Muslim men as a whole, sexologist Susan Block irrationally reduced Umar and other Muslim men’s motivation to commit terrorist acts due to lack of sex, further implying that their propensity for violence is due to circumcision.  Either the lack of sex can lead to terrorism as per Block’s hypothesis, or the denial of sex can lead to peace, as we’re led to think in the case of village conflicts in Mindanao. Whether these explanations are valid or insubstantial, it sends a message that Muslim men are primarily governed by sex.

Lastly, my problem with the focus on Kandatu’s method is it somehow implies that (Muslim) women are only capable of achieving their goals by means of sex.  They use their bodies as currency to negotiate their demands. What of campaigns, lobbying, and other forms of activism? Is that the only available means for these women? Clearly not.