Sarabah follows the life of Senegalese rapper Fatou Mandiang Diatta, better known as Sister Fa, and her quest to address female genital mutilation (FGM)* in her village in Senegal. After releasing her first album and marrying a German PhD student, she found herself in Germany working on her music and wanting to commit to raising awareness of FGM in Senegal, as she herself had undergone the procedure as a child.

Sister Fa’s organization, Education Sans Excision, works with the NGO Tostan in advocating for ending the practice. I looked at how Tostan was portrayed in Nicholas Kristof and Sheryll WuDunn’s Half the Sky a couple of years ago, and noted the lack of African women’s perspectives on FGM in the book. Sarabah offers an important personal perspective from a thoughtful, talented African woman. 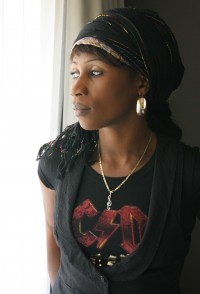 Tostan’s educational emphasis does not aim to vilify the practice outright, and instead promotes a more nuanced discussion of its social necessity, in some instances, as it argues against the practice due to its negative consequences for women’s health. Sister Fa adopts this model in her own advocacy work in the country.  In an opinion piece for The Guardian last month, Sister Fa relates her complicated understanding of her own experience:

“For years, I wondered why my mother had allowed this to happen. It was not until someone explained to me that she didn’t have a choice: she was not cutting me to harm me, but because she felt that she was doing what was the best for me.”

When she returns to her village in Senegal with her German band, Sister Fa relates how the practice has little to do with Islam. Her village was one of the last to convert to the religion and retains cultural practices that predate their conversion. Imams might speak for or against the practice according to their own convictions, but it is ultimately women themselves who make the decision for their daughters to undergo the procedure due to its social convention.

Sister Fa is aware of her outsider status as a German resident, and fears being perceived as such as she promotes her anti-FGM campaign in Senegal. This discussion is an ever-important one in the field of development—who has the authority to conduct advocacy against harmful social practices? And also: what role might those who have left their countries have to play in promoting wide-scale social change back home? What role do artists play in activism?  I was not expecting these points to come up in the film, and found them refreshing to hear from Sister Fa herself.

In a memorable scene from the film, she is at a primary school near her village, where she engages with students to discuss what FGM is, why it is practiced, and how it is harmful to women’s health. At the end of their discussion, they sing a song alongside musicians from Sister Fa’s band against excision in their communities. While she also engages in discussion with elderly women in her village, I found it encouraging to see children – both young men and women – having these frank discussions in the same room and later advocating for ending the practice.

Sarabah is an inspiring film, an important viewpoint from the perspective of an African woman who underwent the procedure. She reminded me, at times, of the protagonist in Ousman Sembene’s film, Moolade and the role that media plays in encouraging change.  Like the protagonist in that film, Sister Fa does things her own way with resolve and stands firm in her convictions, in both her decisions to pursue a career in music and to return to Senegal for advocacy. Music is a powerful vehicle for discussion. Near the end of her piece in The Guardian, she says:

“I am just trying to speak for the many women who cannot raise their voices. I feel that when I talk, one person listens; but when I sing, thousands of people can hear my song.”

*The language around FGM is often politically charged.  See this post for an earlier discussion about it on MMW.