The “Cool” Muslims of Contemporary Islam: Female Converts and their Presence in the Media

As a convert to Islam, I have had other Muslims ask me, particularly in settings where I have discussed Islamic feminism and LGBTQ2/S rights, whether or not I converted to be one of the “cool” Muslims that are often times presented in the media. By “cool,” people often mean not-orthodox.  (I started preparing this post before the discussion in the comments of Nicole’s post last week, but those comments emphasise the privilege that comes alongside getting to choose to be one of the “cool” ones.)

While looking for interesting Muslim women’s stories in Google leading up to International Women’s Day, it was common to find few of the same converts to Islam coming up again and again in my search. Female (usually white) converts to Islam are quite prominent in the media, particularly when their activism or focus is on the area of Islamic feminism (oftentimes equated with “progressive Islam”), or if their conversion stories seem unusual or particularly emotional. An example of this can be seen in an article from last November on the rise of converts among Western women, which Lara covered for MMW.

Unlike other Muslim women, converts to Islam are often considered to have the ability to mediate between Islam and their particular societies (see, for example, Sarah from Little Mosque on the Prairie). It’s possible that some might be more accepted in the media because they “represent” a “progressive” form of Islam.

For instance, Dr. Amina Wadud a well-known scholar and activist, has been interviewed, cited, quoted or referred to in few articles and videos (here, here, and here in Spanish).  Wadud, as many know, is a controversial scholar for many members of Muslim communities, especially for having led a highly-publicised mixed-gender prayer and for being a prominent Islamic feminist.

Western media and Muslim religious media outlets have placed Wadud at a centre of the discussion between “progressive” Islam and orthodoxy (here and here). Nevertheless, Wadud continues to navigate the complex relationship that the Western media has with Muslim women.

Similarly, the example of Yvonne Ridley provides us with some insight into the role that converts to Islam are deemed to fulfill.  Riddle is quite prominent in the Western media possibly because of her background as a journalist. She seems to be quite interesting especially because of her conversion story, which has been closely related to the post-9/11 war on terror (you can watch it here). Ridley converted to Islam in 2003 after being held captive (and later released) by the Taliban in 2001 for illegally crossing the Pakistan-Afghanistan border. Other Youtube clips of Ridley show her discussing topics like the war on terror, the works of Harun Yahya, and her own conversion to Islam. 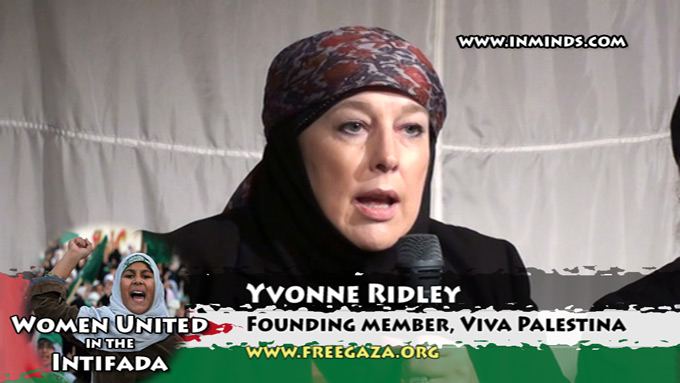 Ridley has been able to connect with the media in a way that other Muslim activists may not be able to; and  she has provided the Western media with a message that may be troubling (and that is, Islam is not bad for women) coming from a Western, Caucasian journalist. Her relationship with the media relates to her background as a journalist, but it could also be influenced by the combination of her Western background and her identity as a Muslim convert.

The conversions of “celebrities” such as Kristiane Backer and Lauren Booth were also widely covered. Their changes of religion get discussed under the “Oh my God Western women are converting to Islam!” phenomenon (here and here). Nonetheless, the conversion stories that these women tell have had an interesting effect in the Western media as well as in Muslim media outlets. Similar to Backer, Booth received a lot of attention when she became Muslim, and seemed frustrated at having to explain herself over and over.

Conversion stories are appealing across the divide for many Muslims and non-Muslims. They are featured in the media, particularly Western media, as an “exotic” way of digging into Western women’s thoughts and feelings, although not necessarily approving of them. For Muslim media outlets, the story is somehow different. They feature convert stories as a way to “prove” to the world that Islam is desirable for women and even more liberating than feminism.

On the Spanish side, Ndeye Andújar,  co-organizer of the Congress of Islamic Feminism, and Marie Laure Rodríguez Quiroga, the president of the Unión de Mujeres Musulmanas de España (Union of Muslim Women of Spain), are perhaps deemed as an “acceptable” combination of Islam and Westernization. This can be seen through their involvement with more conservative sides of the community, such as WebIslam, while still advocating for Islamic feminism and LGTBQ2/s rights.

Another example can be seen through Ingrid Mattson. Mattson is also a prominent figure in North American media, particularly for being the first female and the first convert to be elected president of the Islamic Society of North America (ISNA). Mattson is often featured in the media for her academic work focusing on interfaith dialogue (here and here). Nonetheless, her conversion is also said to be a source of understanding between communities.

This small selection of female converts to Islam speaks to an interesting relationship between them and different media outlets. Female converts (especially white women) are depicted as mediators between Islam and the West, and are sometimes credited with reconciling Islam and feminism.

The question that must now be asked is whether or not this is true. Just like the previous instances of female converts being identified as “more progressive” or “Westernized” there may be other examples that show that Muslim converts may be harder to position as mediators between “both worlds,” for instance, Maryam Jameelah, who, coming from a Western background and being a convert, supports polygamy, is close to the Jamaati Islami movement and seems to politically oppose the West (as discussed in here).

In addition, it must be asked whether or not the focus on female converts to Islam tells us anything about the general situation of women in Islam (if it can be generalized) and the opinions of diverse Muslim women. These women, as mediators of both worlds, can, to some degree, pick and choose their causes and their battles. Some other Muslim women may not have this choice.

The phenomena of choosing female converts as the “ideal representation” of Islam in the West, for example, is a troubling one because it excludes the majority of female Muslims and it silences other voices.  It also tends to highlight the voices of white converts over women of other backgrounds, and, of course, it ignores the many Muslim women from Muslim backgrounds who were born and raised in the West. Although their contributions are often times very valuable, are we implying that there is not value in non-Western or non-feminist views? And are we saying that women who are raised Muslim can never be considered Western and can never be understood by the West?

Review: Faithfully Feminist
September 17, 2015
Do Women have a Voice in the Qur’an? Review of “Recovering the Female Voice in Islamic Scripture.”
May 12, 2015

A Muslimah’s Guide to Rocking the World
November 19, 2013