Beyond M & M: Moving Past the Muslimness and Motherhood of Nurul Izzah Anwar

With the recent high-profile acquittal (on charges of sodomy) of Malaysia’s former Deputy Prime Minister and current opposition leader, Anwar Ibrahim, there has been increased international interest in Malaysian politics. Along with Ibrahim, the spotlight has also fallen on his People’s Justice Party and one of its leading lights, Nurul Izzah Anwar, daughter of Ibrahim and party President Wan Azizah Wan Ismail. While her entrance into politics was triggered by her father’s legal issues and her involvement in campaigning for his release, Nurul Izzah Anwar was elected as the member of parliament Lembah Pantai in 2008 and has since been active in the country’s reform movement. 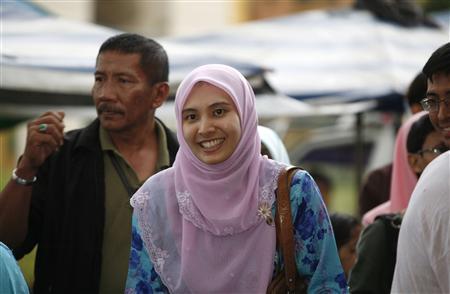 She is often spoken of a as future leader of Malaysia, but one wonders if this is because of her personal capabilities, or because like Benazir Bhutto, Megawati Sukarnoputri and Sheikh Hasina, she is a Muslim woman who is the daughter of a an important political figure?

International coverage of Izzah has tended to focus on her being two “M’s”: a mother and a Muslim. A Reuters article following her election to parliament noted with incredulity that she had just given birth and went on to belabour the point with the (not at all relevant) fact that she was still breast-feeding her baby. Such commentary is reminiscent of the widespread incredulity that greeted the photograph showing the then-Spanish defence minister Carme Chacon, reviewing the troops (super macho business) while seven months pregnant (super lady business). However, incredulity can soon turn to criticism, as with the fuss surrounding Rachida Dati’s return to work, 5 days after giving birth. Interestingly, while in “modern,” secular France, Ms. Dati’s behaviour was viewed as showing anxiety over her job, for Izzah, operating in a much more conservative milieu, it did not have a negative effect on her political campaign, with her managing to unseat the sitting MP by a comfortable margin. Still, the focus on her family life is irritating because it highlights the disparity between the media treatment and expectations of female politicians as compared to their male counterparts.Their family life and choices are scrutinised in a manner male politicians never have to suffer.

As for the second “M,” a piece in the Guardian last year discusses a meeting with Izzah, and her surprise at not being asked “the big question” – this, of course, referring to her experience that “Many western journalists only want to know why I wear a headscarf.”

Last week’s interview in the Daily Telegraph manages to avoid such cliches by giving prominence to Izzah’s plans for reform, rather than to her gender or family history. Pleasingly, the interview consists of both a video interview and a more in-depth article, so it’s possible to hear and see Izzah’s viewpoints. While she discusses at length the need for reform and anti-corruption work in Malaysia, and the threats she had faced from being such a high-profile voice in the reform movement, her answers also indicates the delicate balance between, as she puts it, “respecting public space and not encroaching into people’s private lives.” Likewise, an outwardly superficial question, about whether she would permit Beyonce to perform in Malaysia, highlighted the debate about religiousity in public spaces (an issue which has again reared its head with the cancellation of an Erykah Badu show in Malaysia due a picture of her with a “tattoo” of the word “Allah”). In response,  Izzah deftly countered with the answer that she would get Radiohead to perform first and discuss dress afterwards.

With such a sort interview, it is not possible to cover all issues.  Izzah has spoken on the importance of greater racial equality in Malaysia in the past and it would have been interesting to have heard her talk more about this subject. However, the interview was overall a very positive one, both for its prominence of Izzah’s words as opposed to journalist spin, and its avoidance of cliches.

Editor’s note: The piece has been edited to reflect the proper way to refer to Nurul Izzah Anwar; initial references to her as “Ms. Anwar” were my (Krista’s) fault, not Lara’s, and I apologise to her for that.  Thanks to Lara and to commenter Anwer for the correction.

Just a “Liberal” “Girl”?: The Framing of Nurul Izzah Anwar over “Freedom of Religion” Remarks
November 26, 2012