Malalai Joya, an Afghan activist for women’s rights (and many other things), was in Toronto tonight on a cross-Canada tour to promote her new book, A Woman Among Warlords: The Extraordinary Story of an Afghan Who Dared to Raise Her Voice.  For those unfamiliar with her story, the book description is as follows:

Malalai Joya has been called “the bravest woman in Afghanistan.” At a constitutional assembly in Kabul in 2003, she stood up and denounced her country’s powerful NATO-backed warlords. She was twenty-five years old. Two years later, she became the youngest person elected to Afghanistan’s new Parliament. In 2007, she was suspended from Parliament for her persistent criticism of the warlords and drug barons and their cronies. She has survived four assassination attempts to date, is accompanied at all times by armed guards, and sleeps only in safe houses.

Often compared to democratic leaders such as Burma’s Aung San Suu Kyi, this extraordinary young woman was raised in the refugee camps of Iran and Pakistan. Inspired in part by her father’s activism, Malalai became a teacher in secret girls’ schools, holding classes in a series of basements. She hid her books under her burqa so the Taliban couldn’t find them. She also helped establish a free medical clinic and orphanage in her impoverished home province of Farah. The endless wars of Afghanistan have created a generation of children without parents. Like so many others who have lost people they care about, Malalai lost one of her orphans when the girl’s family members sold her into marriage.

While many have talked about the serious plight of women in Afghanistan, Malalai Joya takes us inside the country and shows us the desperate dayto-day situations these remarkable people face at every turn. She recounts some of the many acts of rebellion that are helping to change the country — the women who bravely take to the streets in peaceful protest against their oppression; the men who step forward and claim “I am her mahram,” so the fundamentalists won’t punish a woman for walking alone; and the families that give their basements as classrooms for female students. 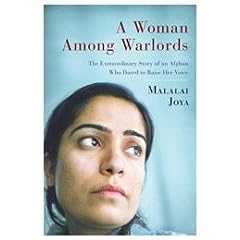 The cover of Joya's book. Image via Amazon.

Considering how often Afghan women are spoken about in the media, it was refreshing to get a chance to hear a woman talk about her own experiences.  Joya started her talk by saying that she didn’t want to write a book about herself, and that although she had become famous for comments she made to Afghanistan’s Loya Jirga in 2003, there are many other activists, especially underground activists, whose stories she felt were more important to tell.  She ended up writing her book because other people kept encouraging her to write, and told her that she could tell the stories of others through writing her own story.

Much of her talk focused on the post-9/11 situation in Afghanistan, and the foreign invasion that, although claiming to support Afghan women, has created a context in which widespread rapes, kidnappings, acid attacks, killings, and other abuses have occurred, even by those who claim to promote democracy.  Although the Taliban are no longer in power, women continue to wear burqas outside in order to protect themselves; as she put it, “today, this disgusting burqa gives us life.”  She was also critical of the lack of international attention given to the Afghan civilians who have been killed by the ongoing war, arguing that “the blood of my people is not water.  It’s worth as much as the blood of westerners.”  From her perspective, international support to Afghanistan should come in the form of a helping hand, and not of an occupation.

Joya was particularly harsh on the current Afghan government, repeatedly referring to it as a “mafia system,” full of corruption and warlords.  She spoke briefly about the bad name that is given to Islam when oppression and violence are committed in its name, although she was clear that “the problem of the people is not with Islam; the problem of people is with the Islam of bin Laden” (and of several others whose names I didn’t have time to write down.)  She also dismissed the latest elections, arguing that both of the main candidates, Hamid Karzai (the current president) and Abdullah Abdullah are linked to warlords; she described both as puppets who had betrayed the people of Afghanistan.

Joya described education as the key to emancipation for Afghanistan, and especially for Afghan women.  She quoted Meena, the founder of the Revolutionary Association of the Women of Afghanistan, who was killed in 1987, and who had said that the women of Afghanistan are like sleeping lions (according to this, the full quote is “Afghan women are like sleeping lions, when they awaken, can play a wonderful role in any social revolution.”)  Education, according to Joya, is what is needed in order for these lions to awake.

For those wanting to do further reading on the situation in Afghanistan, as well as American foreign policy, Joya recommended reading Bleeding Afghanistan, Ghost War, The Political Economy of U.S. Militarism, and I is for Infidel.  (For the record, I’m linking to Amazon to keep the book citations consistent, and because you can often access other information such as book reviews; however, I personally think that the best places to buy books are local, independent bookstores.)

Malalai Joya is, of course, only one woman, and it would be unrealistic to expect her to reflect all Afghan women’s experiences, but I think she brings a perspective that is important to hear, one that criticizes the Taliban as well as the current government, and draws attention to the problems of the current foreign occupation in Afghanistan.  I also think she has some credibility because of how strongly she criticizes all of the major stakeholders in Afghanistan right now, which means that her voice cannot be easily co-opted for any one group.

I’m hoping to get my hands on a copy of her book soon, insha’Allah.  Have any of you readers had a chance to read it yet?