Sarkozy to the Rescue! France, Burqas, and the Question of “Choice” 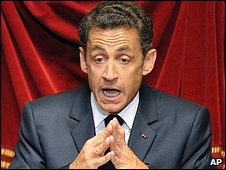 As I’m sure many of you have seen already, French President Nicolas Sarkozy said last week that he supports a commission to consider banning the wearing of burqas in public places.  Here are some excerpts of his speech, quoted from this article:

“We cannot accept to have in our country women who are prisoners behind netting, cut off from all social life, deprived of identity,” Mr. Sarkozy told a special session of parliament in Versailles.

“That is not the idea that the French republic has of women’s dignity.”

“The burka is not a sign of religion, it is a sign of subservience. It will not be welcome on the territory of the French republic,” the French president said.

But he stressed that France “must not fight the wrong battle”, saying that “the Muslim religion must be respected as much as other religions” in the country.

If this conversation sounds familiar, it’s because we keep having it.  It has come up recently in debates about whether the niqab should be allowed in courtrooms, and whether feminist organisations in Quebec should support a ban on headscarves for public employees.  There’s pretty much a set script: Western leader (usually white and male, nearly always non-Muslim) decides that Muslim women who dress in certain ways are a threat to Western culture, and under threat from the big bad extremist Muslim men in their communities.  Burqas (or niqabs, or headscarves) are portrayed as completely incompatible with Western societies, and their wearers assumed to be entirely outside of Western cultures until the offending clothing can be removed.  Patronising conversations about oppression and choice follow, and the tiny percentage of people in the area being discussed who actually wear the item of clothing being debated all suddenly find themselves as pawns in discussions about principles of liberation, secularism, fundamentalism, and symbols of the demise of the world as we know it.

We’ve been through all of this before, and I’m not going to write another post re-hashing why this latest incarnation of the clothing-ban debate is problematic.  Jill at Feministe and Wendi at Racialicious have also looked at this particular issue in detail (although some of the comments on the Feministe article are pretty horrendous; the commenters should all go read this piece.  As should the rest of you, because it’s funny.)

Moving on…  I want to focus in on one particular element of the debate, which is the idea of choice.  It comes up a lot, and often gets talked about in a very superficial way, by both sides.  Conversations about whether certain articles of clothing should be permitted often go like this:

A: The [hijab/niqab/burqa] should be banned, because it’s oppressive!

B: No, it’s not.  Some Muslim women choose to wear those things.

A: Yeah, but is it really a choice?  Their husbands will probably kill them if they don’t.  Or they probably feel like they have to wear it to live up to cultural expectations.  Or they are misguided and believe this is a religious obligation, even if it isn’t.

B: But we can’t just assume that all women are forced to wear it…  Some women really do choose it.

And so on.  The thing is, the whole idea of any “choice” being completely free of any social constraints is a bit of a myth.  I think we need to complicate this issue of “choice,” for two reasons.

First, choice is always socially contextual.  Even if I might “choose” what I want to wear every day (and for me personally, that choice has yet to include a burqa), there’s a reason I don’t walk around outside in my pyjamas, or attend classes wearing fancy dresses.  We don’t ever make choices that are entirely independent of social expectations.  So when I see people express the idea that women are oppressed by their crazy Muslim communities that make them believe that they want to wear a burqa, and that because this “choice” is made in order to conform to social expectations, we should ignore it, because it’s not a free choice, it just makes me wonder: what choice is ever independent of the expectations that are imposed on us by our societies?  And how can we decide which “choices” are legitimate and free, and worthy of being respected?

Second, the assumption made by many people is that the “choice” is being made between either wearing the burqa or living a life that’s completely free of sexual oppression.  The problems that are supposedly inherent to the burqa are assumed not to exist once the burqa is removed.

So when Sarkozy talks about women in burqas as “prisoners behind netting, cut off from all social life, deprived of identity,” and about the burqas themselves as markers of “subservience,” he’s implying that it’s the burqa, and the burqa alone, that holds women captive (and that it, apparently, deprives them of identity, a claim that might say more about the way that Sarkozy conceptualises identity than it does about the women he’s attempting to rescue.)

It’s a narrow-minded perspective, because it ignores all of the other ways that sexism acts upon women, both within Muslim communities and within non-Muslim communities in the west.  After all, there are all sorts of ways that non-burqa-wearing women may be objectified (and thus deprived of identity in a different way), or made to be subservient. It also misses the many other systems of oppression – for example, those based on race or economic class, both of which also affect many Muslim women in France, that imprison and marginalise (or “cut off”) women.  So, when these women make the “choice” to wear the burqa, they are not necessarily choosing between imprisonment and freedom, or between subservience and empowerment; they may be making this choice between multiple forms of imprisonment (symbolic or otherwise), or multiple options that still place them in subservient positions, or they may even be making this choice in a context where the burqa represents the positive side of those dichotomies.  The point is that the arguments about “choice” simplify the discussion, and ignores the ways that women may claim agency even in situations where their possible “choices” might be restricted.

(As a side note, Saba Mahmood, in her book Politics of Piety: The Islamic Revival and the Feminist Subject, has some very interesting things to say about religious identity and practice in relation to women’s agency.  Go read it.)

What I’m trying to say is that I don’t think that “choice” is really the best framework for the conversations that we are trying to have.  Of course, I believe that we should work to create conditions so that all people can wear the clothing that makes them feel comfortable.  But I also think that it’s hard to have these conversations if we focus primarily on ideas of “choice,” which often ignore the complexity of the contexts in which all of our choices take place, and the many competing systems and structures in which we attempt to act.

Marilyn Monroe in a Burqa: Commentary or Cliché?
April 2, 2014
Effective Discussions on the Oppression of Women: Is the Burqa It?
November 20, 2013