You Say You Want a Revolution (in a Loose Headscarf)

This was written by Mimi and originally published at threadbared. 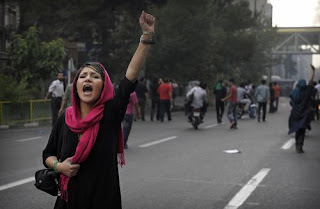 Because this is a fashion plus politics blog, I want to post some very brief thoughts about the protests rocking Iran after what some observers are calling a fraudulent election, reinstalling President Mahmoud Ahmadinejad against his main opposition, moderate reformer Mir Hossein Mousavi. (For news about the election and protests, The New York Times’ The Lede News Blog is frequently updated. For more analysis, check out Juan Cole.)

A glance at the Western media coverage from before and after the election reveals an overwhelming visual trope — the color photograph of a young and often beautiful Iranian woman wearing a loose, colorful headscarf, usually pinned far back from her forehead to frame a sweep of dark hair. Such an arresting image condenses a wealth of historical references, political struggles, and aesthetic judgments, because the hijab does. As Minoo Moallem argues in her book Between Warrior Brother and Veiled Sister: Islamic Fundamentalism and the Politics of Patriarchy in Iran, both pre- and postrevolutionary discourses commemorate specific bodies –whose clothing practices play a large part— to create forms and norms of gendered citizenship, both national and transnational. What Moallem calls the civic body becomes the site of political performances in the particular contexts of modern nationalist and fundamentalist movements. 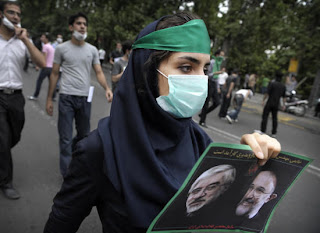 This particular image being disseminated throughout the Western press right now is no exception — we are meant to understand the looseness of the scarf, the amount of hair she shows, as political acts, manifesting a desire for Western-style democracy. But this shorthand is too simplistic, too easy. As Moallem argues, Islamic nationalism and fundamentalism are not premodern remnants but themselves “by-products of modernity.” As such, the image of the Iranian woman in her loose headscarf is not a straightforward arrow from Islamic backwardness to liberal progress, but a nuanced and multi-dimensional map of political discourse and struggle.

In her book, Moallem writes, “while I am interested in the production of the civic body, I want to show its instability over time in Iran.” We can see this instability in the histories of forced unveiling and forced veiling that mark particular historical and political moments in Iran. Very briefly, and no doubt simplistically, the pro-Western Reza Shah banned the veil in 1936 in a broad modernization effort, authorizing police to forcibly unveil women in the street. Women donned the veil during the lead-up to the revolution as a visible act of defiance against the Shah’s corrupt and brutal rule. After 1979, the broad coalition that had briefly united against the Shah was destroyed by the conservative Shia cleric Ayatollah Ruhollah Khomeini, resulting in a fundamentalist regime that, among other things, enforced veiling for women. As such, Moallem argues, forced unveiling and forced veiling are not dissimilar disciplinary practices that regulate the feminine body as a civic body subjected to the order of the visible. Moallem observes, “My grandmother’s body –like my own later– was marked by corporeal inscriptions of citizenship. Both of us shared an incorporated traumatic memory of citizenship in the modern nation-state. She was forced to unveil; I was forced to veil. Living in different times, we were obliged by our fellow countrymen respectively to reject and adopt veiling. Our bodies were othered by civic necessity.” (Between Warrior Brother and Veiled Sister, 69)

This is the barest intimation of the complicated history of the civic body we are seeing in photographs from Tehran now — in which the young woman with the scarf tied loosely, the lock of hair curling against her cheek or forehead, is made to stand for both this history and also for so much more. What is often lost in translation here is that unveiling does not always signal freedom, democracy, modernity, women’s rights, whatever — even if it might gesture toward these things in this particular moment. And it’s important to situate this moment, in which we must recognize how both forced veiling and forced unveiling operated as disciplinary state edicts –often enacted violently on female bodies by male soldiers or police– at discrete political times. As such I would issue two cautions. The first, we cannot necessarily know from how a woman ties her headscarf what the shape of her politics might be, even though clothing clearly does matter politically. And second, we might commit further violence (refusing her complex personhood, for instance) in assuming that we can.

Because the hijab is so often made to stand as a visual shorthand for Islamic oppression in the West, I wanted to reference its specificity as a political performance of a particular feminine civic body in Iran (which would be different than its history in, say, Turkey, where some female Muslim university students are demanding their rights to education against the state ban on headscarves in public schools and government buildings) in order to render these photographs that much more complex, and the emerging political situation that much more nuanced, in this moment. 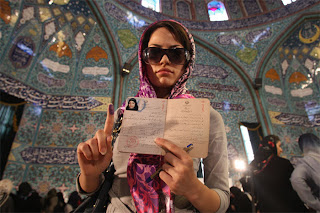 An Iranian woman shows the ink on her finger after voting at a polling station in Tehran on June 12, 2009. Hundreds of voters were standing outside one of the biggest polling stations in uptown Tehran, an indication of a high voter turnout in the early hours of the presidential election in Iran. AFP PHOTO/ATTA KENARE (Photo credit should read ATTA KENARE/AFP/Getty Images)