I spent this past Sunday morning at a brunch hosted by the Canadian Council of Muslim Women to honor “Women Who Inspire.”  Five Canadian Muslim women were presented with awards recognizing their contributions in the fields of politics, education, and community activism.

Also present was Mona Eltahawy, a U.S.-based journalist who gave a speech about media representations of Muslims.  She had some interesting reflections that I thought I’d share here on MMW. 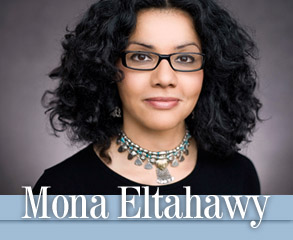 Eltahawy began her talk by suggesting that the CCMW awards should perhaps be re-named to “Women Who Confuse,” a reference to her argument that Muslims doing anything other than chanting angrily (men) or hiding passively under black fabric (women) cause serious confusion to people whose only encounters with Muslims may be through news media sources that rarely represent the kinds of activities that the award recipients have done.  (See this video for an elaboration of her points on “The Happy Muslims Who Confuse You.”)  She characterized representations of Muslim women in particular as dominated by the two “H”s, headscarves and hymens, defined by little more than our clothing and the sexual regulations imposed on us.

Eltahawy spoke about the frenzy among people in the West to “save” Afghan women, and gave a particular example of one organization selling swatches of a burqa, as a fundraiser that almost turned the burqa pieces into some kind of trendy consumer item (and reminded me of the burqa wine-bottle covers I wrote about a while ago.)  She made a great point that “Afghan women are not our gimmicks, and not our dolls.”  I love the way she calls people out on this objectification of Afghan women – the doll image is great, and so true.

One of the most interesting things that Eltahawy talked about was about how more people need to get their voices into the media, rather than just reading and talking about it.  She spoke about her own experience sending an opinion piece to the Washington Post shortly after 9/11; she had no connections with the newspaper, but apparently the Post reads everything sent to them, and in her case they liked her article and got back in touch with her.  They eventually printed some of her writing, and she came to be published in other newspapers.  She encouraged those of us in the audience to try to do the same thing, and to sign off as activists in this field (along with whatever other qualifications we have), as a way of claiming credibility as people that the newspapers should listen to (and publish.)  In a context where so many of us feel like our images are being torn “between people who want to save us and people who want to liberate us,” Eltahawy recommends that we respond to these saviors and liberators by adding our own voices to what’s being said.

I’m not sure it’s quite as easy as Eltahawy made it sound (though, to be fair, her talk was really short and didn’t have a lot of chance to go into detail.)  After all, the newspapers aren’t going to print every thing that comes their way, and I’ve heard of some media declining to post quotes or interviews that add nuance or depth to  a topic instead of confirming their sensationalist slant.  But what I think was important was her encouragement to take an active role in producing media about Muslims, rather than just responding to what other people write (like, you know, on blogs that look at media representations.)  So many of our writers and readers on MMW spend a lot of time writing and reading about these things, and Eltahawy’s encouragement to take this writing also into media sources (online and print) beyond our own blogs was actually pretty inspiring.

Of course, blogs like MMW continue to be important, not that I’m biased or anything. 😉  However, I also really liked Eltahawy’s suggestions, and wanted to pass on her encouragement to all of you as well – it would be great to see more of all of our work reaching out in new directions.