This was written by Taz and originally published at Sepia Mutiny. Muslimah Media Watch thanks Cycads for the tip!

Our recently retired around the way desi girl made a come back this past week in New York. Not in music, but in fashion. Yes, the queen of sparkly spandex and fake purple flowers on derby hats debuted her new line at same time as New York’s Fashion Week.

As promised, M.I.A. has launched her limited-edition clothing line, and the “Okley Run” store is open for business on her Web site. While the prints are pretty much as outlandish as you expect, the prices for each individual piece are a bit insane—and not in the “clashing colors that actually look better and better the more you focus on their dissonance” way, or even the Crazy Eddie way*. [idolator] 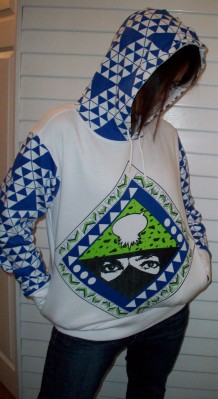 A quick glance of the online store had me come to a screeching halt — directly on the image of a sweatshirt labeled, “Islamic Hoodie.” It could be that the fasting from Ramadan has me extra sensitive, but it seems that everywhere I look I see images of hijabs as the latest fashion icon. I saw it on a shirt at a festival last week, and now this. On the Okley Run site the image of the sweatshirt could not be enlarged but I did see the eyes of a woman in niqab with what seemed like an explosion over her head. Could that really be what she was trying to say? What could M.I.A. have meant by this logo?

This would take some investigative blogging. The image on her site was simply not clear enough to decipher. Luckily, I just happen to live in one of the two cities where Opening Ceremony, the only store carrying her line retail, is – Los Angeles.

I checked it out this past Sunday. The store was ridiculously pretentious, and M.I.A.’s clothing line stood out clearly amongst the sea of black. A few things about her clothing line…

a) It feels cheap. You know how it looks like it should be printed on American Apparel softness? In reality it feels gritty and like the lowest quality generic Hanes T-shirt.

c) The silk screened ink looks like it’d wash off after a couple of runs in the laundry.

d) Only Hollywood hipsters would be suckers enough to throw down that kind of money for that poor quality clothing. I think M.I.A. knows this and is brilliant to gimmick herself like this. (I must admit, I almost got suckered into buying her watermelon sweatshirt.)

We snuck into the dressing room, took some pictures, got told we couldn’t take the pictures and ran out before the camera could be confiscated. All that so that I could get this image for you.

Upon closer inspection I realized that it was not a bomb exploding over the niqab-ed eyes, but a thought bubble exploding or as some friends have pointed out, the Yo MTV Raps logo upside down. For some reason, that made me feel a little better. I have my own theories of what the image is trying to say – but I want to throw it out to the Mutiny — what do you think M.I.A. is trying to say with this image? 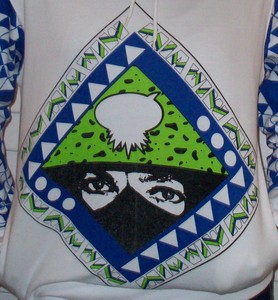 Mukhtaran Mai Is a Shero and We Should Know Her Name
November 17, 2016