BBC vs the LA Times: Who did it better?

A couple of weeks ago, I wrote a critique of a LA Times blog post about and Egyptian organization that is working to combat sexual harassment in Egypt. The BBC News has now has a piece on its website about Egyptian women and sexual harassment as well. The two articles are different. The LA Times story was written as a more traditional story that did a profile of Egyptians, male and female, working to stop sexual harassment. The BBC piece is a collection of stories told by Egyptian women exclusively in their own words. While I liked the first person perspective of the BBC feature, I found the feature to be a mixed bag. I’ll focus on the positive aspects first before offering a more critical critique. 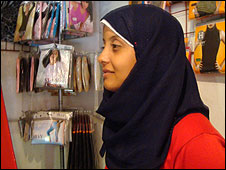 One of the things that I liked about the feature was that the stories were told by a variety of women: hijabi and non-hijabi, middle class and working class, etc. (Posy Abdou, one of the women, is pictured left). Sexual harassment affects women of every social stratum in Egypt so it’s great that the BBC was able to get the perspective of women from different classes. Also, I appreciate how hijabis and non-hijabis are shown because it reinforces the point that sexual harassment is not about the clothes. The more focus that is taken off of women’s clothes, the more focus can be placed on men and how they use sexual harassment as a form of power over women. 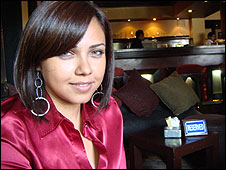 While reading the women’s account provided insight into the daily battle with sexual harassment in Egypt, what I found lacking was any stories of women who fought back and became activists against sexual harassment. Only one of the women profiled, Noha Wagih (pictured right), mentioned anything about activism. She mentioned that she wanted to make a TV program about sexual harassment. While the voices of victims need to be heard, I found it rather curious that the BBC didn’t have one profile of activists such as the one done by the LA Times. All of the stories tell us about women’s experiences with harassment, but that is the extent of the coverage. All of the stories reinforced the image of the oppressed Muslim woman who is helpless. It also reinforces the image of the aggressive, misogynist and violent Muslim man.

Also, the exclusive focus on women takes away the focus that should be placed on men as well. It makes sexual harassment seem like it is only a problem for women, when it is a problem that affects both genders. There’s no examination of patriarchy or ideals of hyper-masculinity that are affecting the perpetrators’ views of women. There’s no look at how twisted interpretations of Islam maybe affecting these men’s idea of women either. By just centering on the experiences of victims, readers are left with no context. They have no idea why this phenomenon is occurring and what is being done to stop it.

Thus, I was left wondering why the BBC did this particular feature. Was it to inform readers about this issue, was it to give the women a chance for their voices to be heard, and was it to reinforce ideas about the superiority of Western gender as compared to gender norms in the Arab world? I honestly was not sure. The only thing I was sure about was that I ultimately finished reading the stories with the eerie feeling that I had just read yet another Orientalist-influenced piece that only served to reinforce stereotypes rather that promote any thing positive.

Women’s Involvement Is Nothing New
August 22, 2013