Muslimahs at the Beijing Olympics

MMW thanks HijabStyle for the links!

With the Olympics in full swing, I thought I’d take a quick peek at the way in which media was presenting the participation Muslim women, if they were at all. Initially, while watching the opening ceremony, I heard tidbits of references to the women competitors from Muslim countries such as Pakistan, noting the number of Muslim women competing. So I thought I’d go searching on the internet to see just how the participation of Muslim women was being presented.

1.This is the first time!

Oman sent a woman to the Olympics for the first time. 16-year-old Buthaina Yaqoubi “will compete in the 100-meter dash and either the long jump or the triple jump.” Her participation is seen as ground breaking in the country with the hope that more women will be able to follow in her footsteps and increase their participation in the Olympic and the Olympic committee. Let’s hope this is true.

Additionally, Sheikha Maitha Mohammad Rashed Al-Maktoum, the daughter of Sheikh Mohammad of the UAE, will also be competing in tae kwon do. She is the first female athlete to be sent by the country. Being the daughter of the sheikh, I have to wonder whether she had an easier time of getting to the Olympics. I hope that she has opened the gate and paved the way for other women as opposed to only taken advantage of her privileged position, which others will not be able to do. 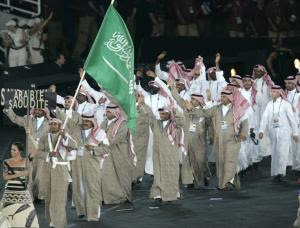 Many sites pointed out that some feel that the countries that allow men-only Olympic teams should be barred. Unfortunately the only countries which outright ban women from participating in the Olympics are Muslim countries – Saudi Arabia (surprise, surprise) and Brunei (and until recently the U.A.E). In a well written criticism Ali Al-Ahmed states that

While the hypothetical example of participating countries barring black athletes from the Olympic Games would have rightly caused international outrage, the committee continues to allow the participation of countries that do not allow women on their Olympic teams.

A point well taken. Indeed barring a race or religion of people from participating would be highly offensive and intolerable. Yet the barring of women, for some reason, is not contested. The argument Al-Ahmed presents is one of human rights.

However, Al-Ahmed makes the incorrect insinuation that Iran does not allow women to participate. Iranian women have been participating in the Olympics since the ’60s. Though there are restrictions as to which sports they can participate in based on the clothing worn for the sport. Nonetheless, his overall argument is one to be taken seriously. Saudi Arabia and Brunei discriminate against people based on their gender and they should face a form of punishment, argues Al-Ahmed. Most of the articles did not mention that these countries were mainly Muslim, but Al-Ahmed did make the connection. It is embarrassing that these Muslim countries have such a ban. Considering that most Muslim countries allow women to participate, Saudi Arabia and Brunei have no excuse to exclude women, other than misogyny of course. And in the meantime, all Muslims will once again be labeled as misogynist.

However, having said that, it is important to note that just as recently as 1992 there were 35 all-male Olympic teams, only half of which, were Muslim countries. It was only after much lobbying that lead to only 4-5 all-male teams by 2004. In 2008 the only all-male teams, it seems according to reports, are Muslim ones – Saudi Arabia, Brunei, Qatar, and Kuwait. 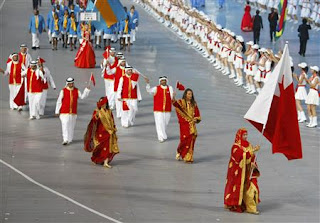 It is important to point out here that there are only 15 women on the 135-member International Olympic Committee. The Olympics in general needs a sex overhaul. Women need a greater role when it comes to the Olympics.

And of course, can we talk about Muslim women without talking about their clothing? It seems not. And much of the coverage of Muslim female participants has been surrounding their clothing. To veil or not to veil? This article discusses how the Olympics this year will see a “sprinkling” of hijabs. I am not sure why this is worth covering, but apparently it seems Reuters is quite surprised or shocked that women can actually compete in sports while wearing a head covering. One would assume that it is quite a simple feat. Quoting Muslim women athletes, the article makes clear that the hijab is not at all a hinderance, but rather a symbol of pride for the women. Again, why is this news? Women in Muslim countries have been playing sports for generations wearing what is culturally appropriate for them, sometimes including a head cover.

Additionally, there seems to be much surprise that some of these Muslim women actually wear clothing different than what those in non-Muslim countries do. Even without a head cover many Muslim female athletes may wear full body suits as opposed to traditional Western swimming suits, or wrestling suits. Why are all women expected to dress the same in sports? As long as the clothing allows for appropriate and necessary movement, why must we have one way of dressing while competing? The interest expressed by many news outlets is not surprising, but is getting old. Yes, women around the world do not dress the same, including while competing in sports. Get over it. It’s really not a big deal. And if they are going to cover Muslim women in
the Olympics, what about those Muslim women who do not wear hijab?

The four themes appeared most blatant to me. Although other messages were present, these four were most common.

On a happy note:

Algerian judoka Soraya Haddad* won the first Olympic medal for Algeria, Africa, and the Arab world on Sunday (August 10th), taking bronze in the -52kg category at the 2008 games in Beijing.

* I am not sure if she is Muslim or not.