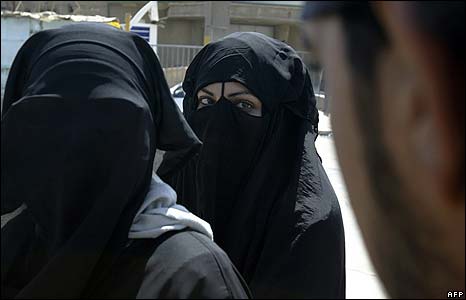 One of the most problematic aspects of coverage of women suicide bombers is the focus on personal motivations. News stories about women suicide bombers often focus on revenge for the death of a loved one and dishonor from rape or sex outside (thus, forcing them to become suicide bombers). In fact, the Times article that is linked to in the Friday Links for 7/1/08 is titled ” Love, blackmail and rape – how al-Qaeda grooms women as ‘perfect weapons’”.

There’s also the usual focus on clothes. The three articles linked to in this post as well other, older articles almost always focus on Muslim (usually hijabis) women’s dress. The assumption goes that the “robe” (jilbab) that some Muslim women wear allows them to easily conceal bombs and thus makes them very attractive to extremist groups. The picture above is part of a slide show that accompanies a BBC News story about women suicide bombers in Iraq. I guess the focus on hijab is to be expected in just about any news story that focuses on Muslim women. However, I find it troubling that hijab is once again tarnished, albeit more covertly than usual. The “robe” explanation usually segues into the idea that women are attractive to extremist groups because they’re less likely to be searched by male soldiers. All of these reasons and motivations for the rise in women suicide bombers totally take the focus off of political circumstances (which Western nations definitely play a hand in) that also influenced the decision of both male and female suicide bombers.