This post was written by Rawi and originally published at Anthology.

A friend shared this BBC news clip reporting on a hijab fashion contest being sponsored by Danmarks Radio, the Danish national broadcaster. The purpose, they state, is to show “cool Muslim women who often make up a very fashion-conscious and style-confident part of the Danish street scene.” Browsing through the pictures on the official website, one cannot help but note the remarkable diversity of the headscarf donning contestants, which in itself shatters the monolithic image of the Muslim woman. The usually unseen but imagined object of the political discourse on hijab has been rendered visible. Interestingly, whereas beauty contests are generally regarded by many feminists as unhealthy practices that objectify women, it almost becomes in this case the very means of affirming these women’s individuality. Which reminds us, therefore, that meaning is always relative.

But of course, the business is more complicated than that. This is still a process of “representation”–which is always a problématique, as the French would say. Perhaps the real question is: who has the power to represent? It isn’t surprising then that the religious establishment doesn’t appear too happy. The BBC report interviews a Danish Muslim scholar who asks, “would you ever see nuns in a beauty or fashon contest?” Local community leaders have asked Muslim women to preserve their modesty and not to participate in the contest. But Khadijah, a young woman also interviewed by the BBC report, wants to reclaim her agency and asserts: “it’s about time that people and the media talk to us and not just about us all the time.” One thing is clear: Danmarks Radio has gotten exactly what it wanted, which was to garner attention as well as to spur debate on an issue; or, to put it another way, to use an already contentious issue to draw website traffic. They deserve props, however, for depicting the hijab as a reality on the streets of Denmark, thereby highlighting its acceptability (or so I think). The significance of this should be evident, at a time when groups are calling for a ban on the hijab altogether. This is in the wake of a recent government decision to ban judges from wearing headscarves or similar religious/political symbols. The pointlessness of the ban isn’t lost on some, who’ve noted that there is currently no one in the Danish courts who would be affected by the ban. Then why all the fuss? 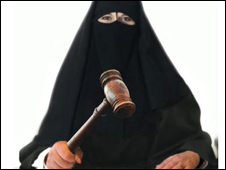 Court President Torben Goldin is reported as saying that “the ban merely had good ‘entertainment value’.” One wonders if the Danish government has nothing better to work on. Meanwhile, the DPP (Danish People’s Party) continues it’s anti-Muslim campaign, which earlier included mass-producing a poster with this ridiculous image of a judge in a burka (and, err, with what looks like a man’s hands!). Perhaps the much-hyped decadence of the West is not in sex, drugs, and rock ‘n roll. It is in the fact that boredom has driven some of them to a politics of absurdity.

Editor’s Note: Author Rawi brings up a great point–the contestant pool highlights the wonderfully diverse faces of Islam. But where does this leave Muslim women who do not wear the headscarf; if this is a contest for Muslim women, why not all Muslim women instead of just those with scarves?

Does this contest contribute to a paradigm of Muslim femininity that includes the headscarf?

How is this competition any different from other beauty pageants (if you take away the scarves and the swimsuit competitions)?

Before this was published, Iraqi-born Huda Falah was named Miss Headscarf 2008.

You can read one Muslim woman’s opinion about beauty contestants for women who wear headscarves here.