Empowered Women in the Age of the Harem

“Backwards” is the word often associated with pre-modern ages, and “oppression” is the word that comes to our minds first when we describe the state of women during those ages. Thank God we live in the modern age where human rights activism has brought women rights that they’ve never had before. Right?

Sorry to shake your beliefs, but there existed times where pre-modern women (in Egypt in particular and the Middle East in general) were granted rights that modern women strive to acquire in many of these communities.

That’s what I discovered while reading a small booklet titled “Women and Urban Economy in Islamic Egypt,” a research paper published in 2006 by the Women and Memory Forum in Egypt.

In this paper, the researchers attempt to explore the role of women (of different social classes) in trade and economy in Fatimid, Mamluk and Ottoman Egypt between the 13th and the 17th centuries – eras where contemporary historical accounts have often overlooked the existence of women, except for in the harem. In order to conduct this research, the researchers had to go through many references and resources, none of which were written by women. The main focus is on women in Egypt; however, the researchers point out that the findings also apply to adjacent areas that were under the same rule (North Africa, the Levant and Arabia). Here I will go through some examples and incidents that caught my attention.

A painting shows some women in one of Cairo’s markets in the Mamluk era. [Source].

Entrepreneurship, such a celebrated word in business and media and seen as a solution to economic and social problems, is not a modern phenomenon. The researchers refer to the travel book “Safar Nama” by the Persian traveler Nasir Khusrawin which he mentions a businesswoman he met in Fatimid Egypt. This lady had collected 5000 brass pots, and used to rent them out. Apparently her business idea was novel and was not very common in her age, such that the writer found it worth mentioning in his book. I see her as an entrepreneur, with her innovative idea that began with her noticing the continuous demand from the society to save water in pots. I can imagine all the planning effort that she went through to establish this business and manage it with this huge number of pots. I bet that in her time there were not as many forums or conferences to encourage women to be part of the entrepreneurial scene as we have nowadays.

What about international trade? One of the documents refers to a woman called Whasha, a good example of a businesswoman who was partner in many grand business deals at her time. She even invested in exporting and done business with a trader based in India. All the documents referenced by the research mention that the female traders of that age undertook the responsibilities of their businesses themselves, without needing to have a guardian to does this on their behalfs. Compare this to the guardianship lawin Saudi Arabia. One might think that all these dealings were done in a sex-segregated society. The sources cited in this research that document the life in Egypt in medieval centuries tell us the contrary. In many occasions it is mentioned that the markets of Cairo were packed with women more than men. Women were the main buyers of consumer goods.

Islamic scholars of these times were aware of women’s participation in the public life. In many cases, they issued fatwas (Islamic legal judgments) that make women’s lives easier. For example: some of them permitted for poor women to work in spinning & weaving during the days of Ramadan, even though spinning requires putting material in their mouth which – legally – nullifies their fast. The reason behind this fatwa is that spinning was the only source of livelihood for a large segment of poor women. Ironically, in our age, some scholars still question the legitimacy of women going out to work, as if this is something new to our communities. 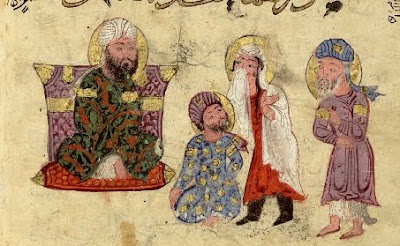 A painting from the book Maqāmāt al-Ḥarīrī shows a woman standing before a judge. [Source].

The part that delighted me the most in this research was the section that tackled the financial independence of women from their husbands. It’s recorded that in the Mamluk and Ottoman eras, women worked in lending and “it was common for women to give loans to their husbands, and if they refrained from repaying the debt the women would sue them in the courts.” There were similar stories of women who owned properties; they would ask their husbands to pay the rent if they chose to live in her property. Women who today feel helpless should know that their great-grandmother might be the courageous lady who sued her husband to get her rights back.

Calling women in the streets of Egypt with the name of any male member of her close family has always been something that gets on my nerves. Many times in the street my aunts or uncles would call me “Ahmed” (my father’s name) or even with me uncle’s name! When you ask them about the reason for such an act they reply saying that it’s improper for females to be called by their names in the street. I was never convinced and always felt frustrated. Now I wish I was living in medieval Cairo, after learning that it was socially accepted for men to be called by the names of their mothers (e.g. Ahmed son of Fatima or Ahmed son of the midwife).

At the end of the research I realized that in the age of the harem – an era that is remembered with such stereotypical images of women’s lives – women had the chance to work, to own properties and even to sue their husbands in the courts, and none of these actions were reprehensible or denounced by the community.

As informative as this research was, the researchers’ mission was not easy at all because of lack of documents that document aspects of women lives in these ages. Finally I found something to be grateful for: living in the modern age in which platforms like MMW are of great importance to document the details of Muslim women’s lives in the modern world by the women themselves.


Sometimes I think graduate level history courses should be taught to everyone. In college I had the chance to audit a couple such classes and came out of them understanding world history much better than what was being taught as current/world history at the time.


You are absolutely right, the commercial version of history that that we were taught in school says very little about the true story of history. Unfortunately these fallacies are what ignites waves of hatred and stereotypical thinking among people.
But above all, it’s the responsibility of human beings to go through a process of unlearning/relearning of what they believe to be life facts and to share the new findings with those whoever they can reach.