The Struggle to Wear Hijab on Egyptian TV

Ghada El-Tawil (pictured below) is an Egyptian anchorwoman who just recently returned to television. Six years ago, she was pulled from television after she began wearing a headscarf. The BBC has published a new story about El-Tawil in which she discusses her legal battle, why she wears hijab, and the struggles for Egyptian hijabis in the media. El-Tawil is not the only woman in Egypt who was pulled off the air after deciding to wear hijab. Her story highlights issues of image in the media–even media in a Muslim country where many women wear hijab. 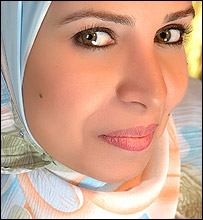 Even now, El-Tawil does not know why her employer, Channel 5 in Alexandria, initially took her off the air. She speculates that her employer might view hijab as being associated with religious fanaticism. “I don’t know for sure why the management doesn’t like us wearing it. Maybe they thought we belonged to a very religious group, or something. They never gave us a proper reason.” I also wonder if the reason for the initial decision is because of the emphasis on women’s image in the media, even in the news. Was El-Tawil no longer seen as being attractive when she began to wear hijab? Did her employer feel that El-Tawil would not be taken seriously as a hijabi? Even now, El-Tawil has only been given one of her original posts (presenting a discussion program that is aimed mostly at women). She has not been given back her other post: reporting the English news bulletin.

El-Tawil’s reasons for wearing hijab may be based on an exclusive reading of the Qur’an (“The rule is, when a girl gets her first period, she has to cover her hair. I didn’t – but sometimes you don’t do many things you should”). However, whether one agrees with her reasoning for wearing hijab, El-Tawil brings up another relevant point, which is that a lot of Muslim Egyptian women wear hijab. I say this point is relevant because it further begs the question of why the Egyptian television media would not want women on air who look like many Egyptian women. Non-representation or under-representation of certain segments of a population is a problem that affects television news media throughout the world. In fact, I wish El-Tawil would have expanded on that point and more importantly, what the implications are for both hijabis and non-hijabis in Egyptian society.

El-Tawil brought up important points, but I wished she had gone into more depth about the issues she discussed. She may have been limited by space constraints (the BBC does limit how much one can write for their site) or her story may have been edited. Despite this, I think her story is a starting point for representations of Muslim women in television news.

Editor’s Note: You can read more about El Tawil’s legal battle in this piece from the BBC from last year.

Strictly Soulmates: The Trials and Tribulations of British Muslim ‘Singletons’
March 11, 2013
Score One for the BBC!
April 29, 2009
The Hole Story: Sexual Abuse in a “Strict Muslim” Household
April 2, 2009